Carney, Antonioli Agree That Carbon Credits are Vital for Getting the World to Net Zero

WASHINGTON, DC – 29 March 2022 | In a webinar hosted by global law firm White & Case, David Antonioli, CEO of Verra, and Mark Carney, former Governor of the Bank of England and current UN Special Envoy for Climate and Finance, discussed the role of carbon credits in helping the world meet its climate goals.

With governments and companies setting ambitious climate commitments, questions about how to achieve these goals are becoming increasingly important. In their remarks, both Antonioli and Carney emphasized that the foremost responsibility of countries and companies is to reduce emissions. Carbon credits serve as an important complementary tool that can channel finance to additional activities that help us meet the global carbon budget. 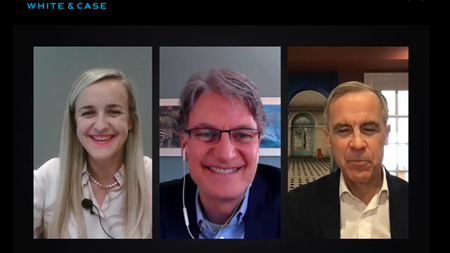 “For [this market] to really grow, it can only do that if it has high integrity on the supply side and on the demand side,” said Mark Carney. He also emphasized that the market’s fragmented nature has held back its growth and the need to develop core carbon principles for the market.

“A lot of work [has been done] by GHG programs to figure out what makes for a credible carbon credit”, added David Antonioli.

Looking ahead, Carney and Antonioli both said they believe carbon markets will play an increasingly important role in the transition to a net zero world – and that they will drive that evolution at times. They cited the role carbon markets played in the expansion of renewable energy projects before the technologies became cost-effective without carbon finance. “Companies buying carbon credits are doing a big service, buying forward, paying premium on these technologies that we will all need,” said Carney.

This webinar was part of White & Case’s “World in Transition” global webinar series and was moderated by Ingrid York, a partner in White & Case.

Verra is a nonprofit organization that operates the world’s leading carbon crediting program, the Verified Carbon Standard (VCS) Program, as well as other programs in environmental and social markets. Verra is committed to help reduce greenhouse gas emissions, improve livelihoods, and protect natural resources by working with the private and public sectors. We support climate action and sustainable development with standards, tools, and programs that credibly, transparently, and robustly assess environmental and social impacts and enable funding for sustaining and scaling up projects that verifiably deliver these benefits.