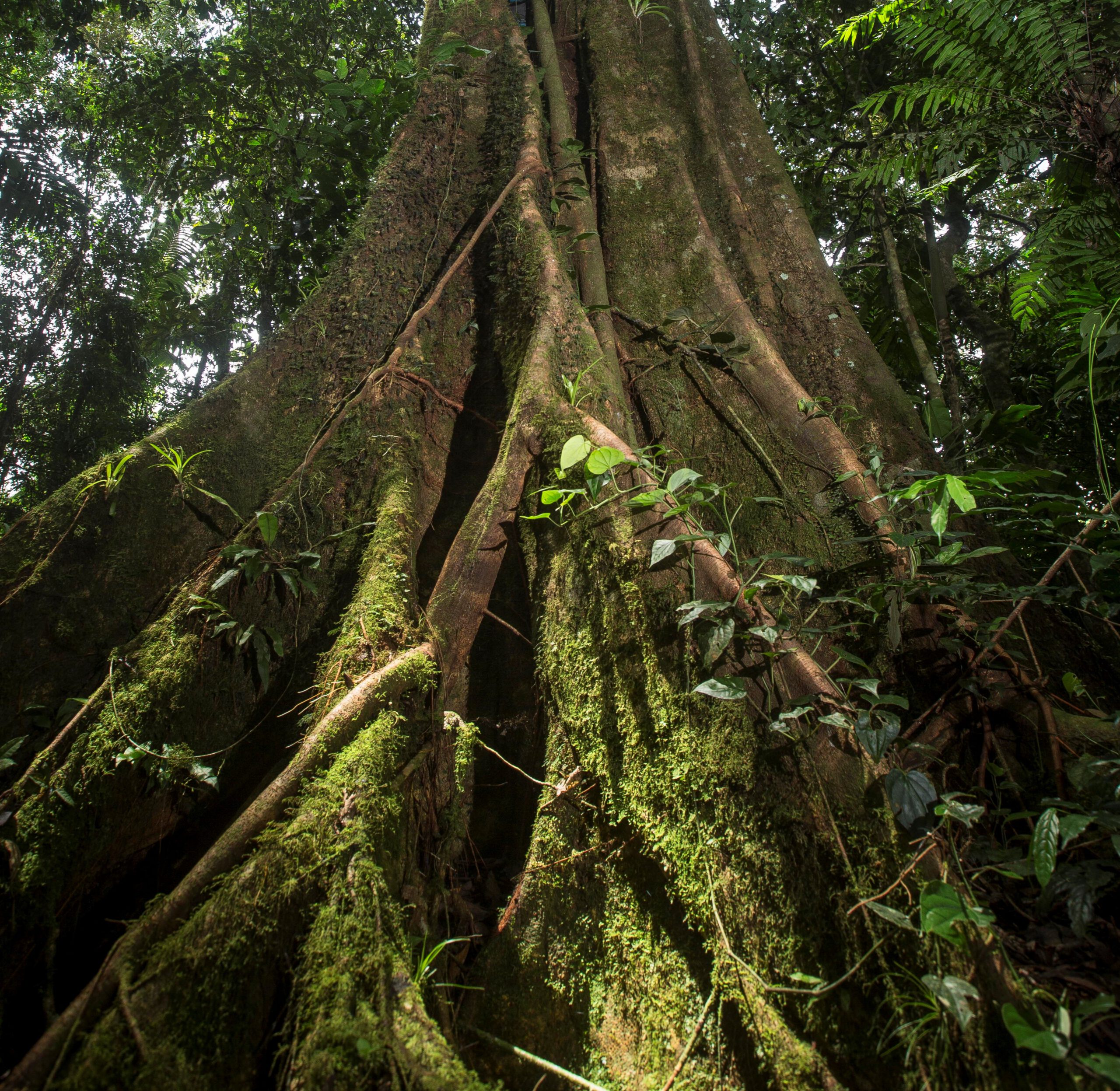 However, we are concerned that the taskforce may be driving too quickly to conclusions, which could lead to poor decisions and end up being detrimental to the market and climate action as a whole. The taskforce is seeking to tackle a number of complicated topics, and the solutions are not necessarily always clear. As a result, we strongly recommend that the taskforce follow a proper process for reaching decisions and that it not succumb to the perceived need to solve everything now. It will be better to have well thought-through solutions, which will likely take more time to reach, than to have a half-baked solutions that could end up being problematic.

We see the above dynamic playing out in two elements of the taskforce’s work. First, the taskforce’s desire to create an assessment framework for greenhouse gas (GHG) crediting programs (a.k.a., ‘standards’[1]) could lead to the de facto creation of an alternative set of requirements for projects, thereby duplicating much of the work GHG crediting programs already provide. Second, the taskforce’s desire to define many of the structures and functions of the governance body now could lock in much of what may be better developed over time. In both of these cases, it will be critical that the taskforce set out a proper process and tap the right experts to develop practical solutions to many of the challenges at hand.

Our comments are summarized into four categories, outlined below. In addition, in Annex A we provide a copy of our detailed responses to most of the questions in the consultation document as set out in the electronic reporting format, which we have also submitted. Please note that below we have highlighted in yellow those responses that are longer than the allowed word limit on the electronic reporting format so that you can find them easily.

We do not believe that the taskforce has put together a coherent and practical assessment framework for GHG crediting programs. Rather, what has been proposed are a series of technical questions that go down the path of creating a new/alternative standard and which would only duplicate (or reverse engineer) the work that has already been done. In addition, most of the technical issues being addressed through the public consultation are not necessarily resolved by a simple YES/NO answer and often require a number of levers, which is exactly why one needs comprehensive, well thought-out GHG crediting programs that make the entire puzzle fit together. For example:

It is tempting to want to have absolute clarity on a number of items, but the reality is that many of the solutions that have been developed over the years reflect a complicated mix of rules and procedures that need to be assembled in a comprehensive and coherent fashion (i.e., GHG crediting programs), and generally do not lend themselves to binary answers. Regardless of how hard one tries, there will be a fair amount of subjectivity, and the role of the governance body (GB) will be to assess whether these rules and procedures, and the oversight that is provided over them, passes muster. As a result, the assessment framework will need to sit between the high-level core carbon principles (CCPs) and the detailed rules and procedures that make up the GHG crediting programs being evaluated. The diagram below illustrates what we believe is missing. 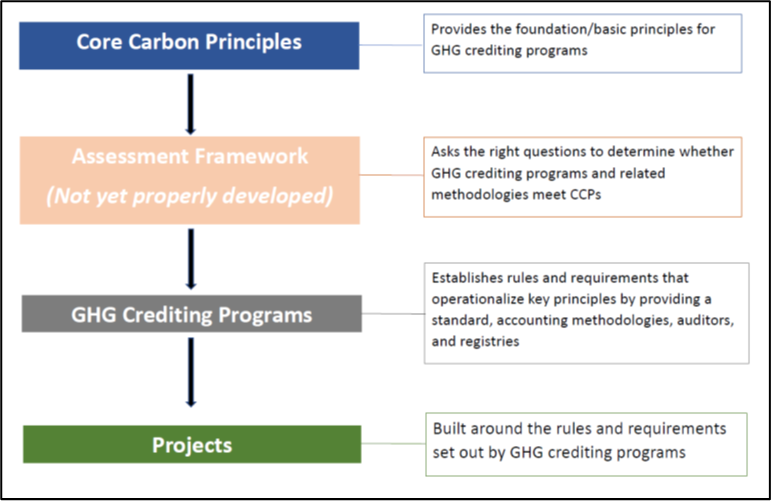 We therefore strongly recommend that the taskforce, or more likely the ES once convened, develop an appropriate assessment framework for GHG crediting programs that does not duplicate what they are doing and adds value by enabling proper oversight. This will not be an easy task as the tendency, evidenced in the consultation, is to dive deep into the details, so a fair amount of work still needs to be done on this matter.

2. Role of the Governance Body

While we agree that the governance body (GB) needs to ensure the integrity of the market, we are concerned that the consultation document indicates that the GB should (also) be ensuring supply (to meet demand). Should this dual purpose be enshrined in the articles of incorporation and operations of the GB, there is a risk that ensuring quality/integrity will conflict with ensuring supply. Therefore, we recommend that the GB focus exclusively on ensuring integrity in the market, recognizing that growing a market for the sake of growing the market will not help solve the climate emergency.

We recommend that the ES be established with its own mandate as soon as possible in order to begin the important work of the GB. With this in mind, we think key operational questions should be resolved immediately, including the establishment of articles of incorporation and bylaws, incorporation in a jurisdiction (which of course will need to be decided), and the hiring of key staff (e.g., Executive Director). As mentioned above, however, it will be important to allow the ES (and the GB more generally) to evolve over time, as the challenges facing the market come into focus and change over time.

In terms of the budget, we strongly recommend that the revenues for the ES (and the GB generally) be first secured through a grant and, as soon as possible, generated from fees levied on CCP-eligible units. This source of funding will provide the GB the certainty it will need to plan ahead and also give it the independence it needs. While there is a potential conflict of interest in respect of this model, we believe that that can be managed by making sure the ES’s work is in line with its mission, which the Board of Directors could ensure.

We are also concerned that the funding requested for ES is excessive. First, we believe that the ‘steady state’ can and should be achieved in a shorter time period (i.e., shorter than three years), which means less funding would be necessary for the startup phase. It will be important for the GB, and the ES in particular, to be independent as soon as possible from any entity, including donors, so we would recommend accelerating the timeframe for moving into the steady state.

Second, we believe the number of staff set out in the consultation document is bloated. Instead, we would recommend stepping into creating the ES slowly, starting with a small staff and building it as and when needed. A big part of our concern stems from the fact, as we mention in further detail below, the current description of the ES’s work is more akin to developing a (new and alternative) GHG crediting program, as opposed to developing and overseeing an appropriate assessment framework for GHG crediting programs. In other words, the current proposal would risk duplicating already existing programs and fail to conduct a streamlined and effective evaluation process to add real value. In addition, it will be important to not hardwire many of the ES’s (and GB’s) functions early on as it is likely that successfully conducting the work will require adaptive management over time.

We would recommend that the ES take on a stronger and more meaningful role so that there is a single entity driving towards the desired outcomes. Overall, we are concerned that the role of the ES is somewhat weak, and could be relegated to a purely administrative role, which also means it will be difficult to attract top talent.

One way to strengthen the role of the ES and to add some needed clarity is in respect of making recommendations to the Board of Directors (BoD). As set out in the consultation document, there are essentially two co-equal parties that serve to make recommendations — the ES is tasked with making recommendations for “strategic decisions”, while the Expert Panels (EPs) will be tasked with making “key decisions”. This already creates a potential clash as it may be difficult to distinguish between “strategic” and “key” decisions, and the lack of clarity could lead to disputes as to who has the authority to submit recommendations to the BoD. In addition, if the recommendations by the EPs and the ES are at odds with each other, it will be best to try to resolve those differences first, before they are submitted to the BoD. To resolve this, we would recommend that the ES have the responsibility to gather and process recommendations, including from the EPs, and present them to the BoD.

We support the idea of standardizing some of the Terms of Use for account holders accessing CCP-eligible credits. For example, globally recognized best practices and standards should be applied by the registries of all GHG crediting programs in the areas of onboarding, auditable logs, and cybersecurity. Standardization in these areas would provide considerable confidence to users of our registries. However, we also believe that the registries managed by GHG crediting programs should retain control over some core clauses that will allow them to manage their registries and accountholders more effectively. For instance, termination terms, dispute resolution, limitation of liability, and suspension of services should remain with the individual registries of the GHG crediting programs because these are integral to the programs’ ability to manage their work and will likely vary by organization, including the fact that these may be incorporated in different (legal) jurisdictions.

Again, many thanks for inviting us to provide our comments to this important process.

Please let me know if you have any questions.

[1] Throughout this document we refer to ‘GHG crediting programs’ instead of ‘standards’ to provide a fuller description of what they do. In particular, most credible GHG crediting programs include a standard setting out the basic rules and requirements, but also include programmatic elements relating to the development of robust accounting methodologies, oversight of independent auditors, and the provision of a registry. As such, it is more accurate to refer to these as ‘GHG crediting programs’ and would recommend they be referred to as such in future communications.

Annex A: Detailed Responses to Various Questions in the Consultation