Descending from the cloud forests of the Chyulu Hills National Park in Kenya, the landscape dramatically changes to dry savannah where Maasai livestock range. Traditionally nomadic and pastoral, the Maasai have become increasingly settled thanks to reductions in the amount of land available to them and socioeconomic change to a cash economy: the Maasai population is growing, children are increasingly in school rather than herding, and herd size is increasing to make livestock a profitable enterprise. Given the area’s rich biodiversity, which includes lions and Kenya’s largest population of African elephants, this trend has led to an increase in human-wildlife conflict, which is one of the issues several of the organizations involved in the Chyulu Hills REDD+ Project work to address. Yes, several organizations, because this project does not just have one group at its helm. It has nine.

The design of the Chyulu Hills REDD+ Project has been validated to the CCB and VCS Standards and the project is currently in the process of verification but has not yet issued carbon credits. However, it has already achieved something few initiatives manage: the primary project proponent here, the Chyulu Hills Conservation Trust (CHCT), is actually a collaboration between nine groups. These groups include Kenyan governmental organizations (the Forest and Wildlife Services), local Kenyan trusts (Maasai Wilderness Conservation Trust (MWCT), Big Life Foundation, David Sheldrick Wildlife Trust), and four group ranches. They are advised by international NGOs (Conservation International and African Wildlife Foundation) and a private sector organization, Wildlife Works Carbon. Coordinating that many people is impressive in and of itself, but in this case, it also lends the project some unique advantages.

The project covers a huge land area – around 410 thousand hectares (about the size of French Polynesia) between Tsavo East and West national parks, Kenya’s largest protected area, and Amboseli National Park, creating an important corridor. By connecting groups working across this region, the project’s leaders can achieve coordination within this large and diverse geographic area, effectively operating at the landscape scale.

Equally impressive, implementing groups have agreed on a system for equal benefit sharing. Any income above administration costs from the sale of carbon credits will be placed into a grant application system that the nine groups can all internally apply for. This democratic internal grants process encourages buy-in and gets financing directly to people on the ground to effect change.

So, what is the project doing? With so many groups involved, quite a lot. Echoing the project’s collaborative management, many of its activities intersect to advance the project’s overall goal of stopping deforestation, forest degradation and grassland conversion. All Maasai families in the project zone graze livestock, either for subsistence or sale at nearby markets. To protect and restore rangeland and sustain this livestock, MWCT has established a seed bank. A women’s group is in charge of managing this fenced off area, collecting grass seed and selling hay. The seed bank will also provide seed for another initiative in the area, a hydrological corridor managed by Just Dig It. This corridor is intended to restore grasslands by developing raised, moisture-trapping hillocks for grasses.

In other areas of the project zone, wildlife rangers work to combat poaching and share real-time information about the location of wildlife with communities in an effort to reduce human-wildlife conflict. A predator compensation program has gone a long way toward reducing retaliatory actions against wildlife that kill livestock. The rangers are provided by project partners MWCT and Big Life Foundation, an organization that has been working in the region for 10 years. Both organizations intend to apply to CHCT to use income from carbon credits to hire more rangers and provide existing rangers with better resources. 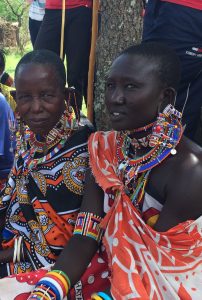 These are just some of the activities that the Chyulu Hills REDD+ Project will continue to advance. Whether supporting native grasses, women’s jewelry collectives or wildlife monitoring in Chyulu Hills National Park, the common thread among project activities is a deep commitment to the region and its communities. The partner organisations each have trained community outreach officers, the majority of which are Maasai from the communities served by the project. Locals are directly developing the project and its activities and gaining work experience in the process.

In many ways, the Chyulu Hills REDD+ Project is a good test for the future of the carbon market. It is an undeniably charismatic project, the kind usually cherished by investors for its genuine commitments to people and planet, for cultivating indigenous leadership and for including charismatic megafauna like lions and elephants. How well credits from this project do on the voluntary market may be a good barometer for the market’s strength in general.

We had a chance to visit the Chyulu Hills project site this December. During an interview with a women’s group about their knowledge of the project, a woman in their village went into labor. One of our project vehicles – the only car around at the time – took her to a nearby health center supported by MWCT. To us, this interaction epitomized the web of interlinking dependencies that are making this project possible. The Chyulu Hills REDD+ Project sets an example for how projects can serve as conveners to support entire landscapes and integrate community activities in a system of mutual, equitable support for people and planet.